It’s not news that advertising harms women (and men) by enforcing impossible body ideals (even the models in the ads don’t look like the ads), adhering to traditional gender roles rigidly, and playing up negative stereotypes of both genders.  Valentine’s Day brings out a special kind of self-hate inducing and objectification in advertising.

This was the inspiration for this post (sorry for the quality, a friend nabbed it on an iPad screenshot for me): 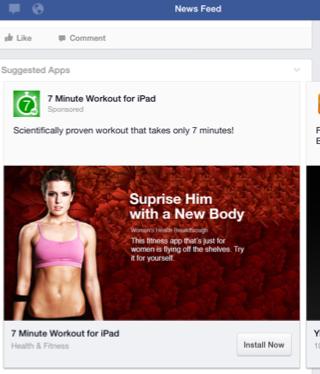 Um…what?  The language of this ad communicates several troublesome things: your body belongs to “him” (it’s a capital H, so maybe they mean Jesus, but I doubt it) and it’s not good enough.  I’m going to lay down some truth to all of you: if someone is with you, they already think you’re pretty great.  If you don’t think you’re pretty great and want to change something about yourself, do it for yourself, and do it for healthy reasons.  If your partner demeans, degrades, and doesn’t appreciate you, don’t “surprise him with a new body” he (or she) doesn’t deserve anyway, surprise him with a breakup because you deserve better than to be made to feel like your body is for the enjoyment and property of another.  Period.  This ad is bullshit and further, there’s zero chance the young woman featured it it only works out seven minutes a day anyway.

These are two diamond ads from previous Valentine’s Day promotions.  For the sake of just evaluating these ads, let’s put away the issues with diamond engagement rings for just a second.  It’s not even a “clever joke” anymore and frankly the implication that women are essentially willing to prostitute themselves for a valuable shiny rock is eyerollingly offensive.  It also reduces the value of a woman to her vagina.  “Give her diamonds, not because you love her, but because you want easier access to sex!”  It cheapens relationships, it prostitutes women and stereotypes men into being drooling sex fiends only interested in women for what’s between their legs.  Frankly I don’t see why a woman would want a diamond from a company that implies she’s a frigid idiot only meltable with an overpriced stone or why a man would want to spend a borderline obscene money at a business that thinks he’s barely higher functioning than a baser primate.

Also according to ads, ladies, not only is your body not good enough for him, but the only part of it he apparently cares about is a disgusting filth hole you should be embarrassed of: 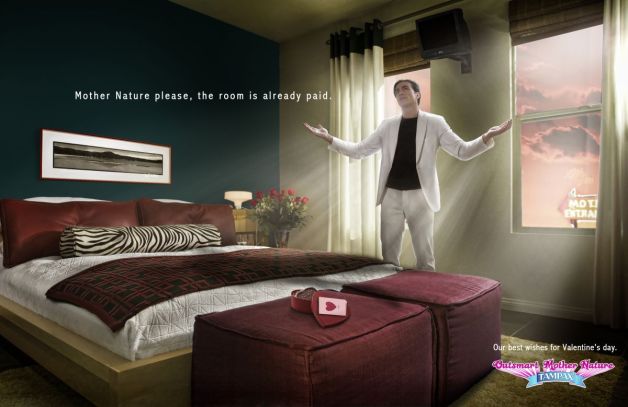 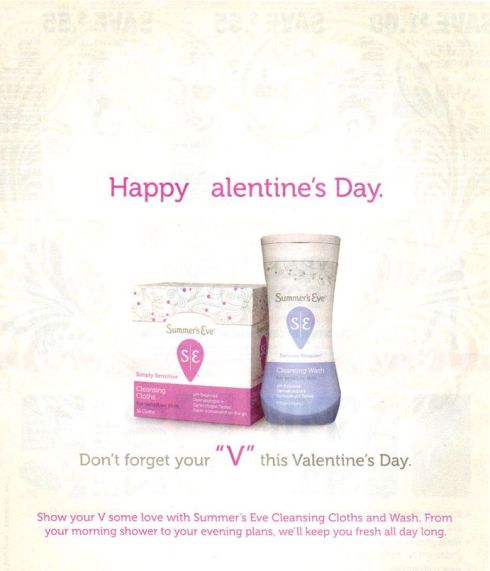 Ah yes, don’t forget your “v!”  Never mind the fact that douching and introducing harsh scents and disinfectants to your vagina really screws up your body’s natural flora and can actually cause yeast infections.  Also don’t forget your naturally occurring period will ruin your significant other’s planning (seriously, it’s a 28 day cycle guys, learn how to count and you’ll know when your GF’s next period is; if you’re not into period sex, then don’t book a sex hotel room during that time.  Duh.).  I’m not even sure what Tampax is trying to communicate – that you can have sex with her tampon in and avoid having your dick look like it came out of the elevator in the Shining?  That doesn’t sound very safe, sounds like a gross way to get TSS actually.  I don’t even understand what’s going on besides trying to shame a woman out of having a period on Valentine’s Day.  I can’t speak for all women but if that was something I could control with will power alone, I would never have a period.  Ever.  It’s messy and painful and I’m a big fan of efficiency and not wasting resources, i.e. keeping my blood inside of me.

This Valentine’s Day, don’t celebrate with consumerism and encourage companies like these to put out degrading advertisements.  Celebrate with earnest expressions of love and loyalty, and cherish those close to you.

This entry was posted on Wednesday, February 5th, 2014 at 19:00 and tagged with advertising, appearance, body image, diamonds, feminism, gender roles, jewelry, media, modern feminism, patriarchy, sex, sexuality, valentine's day, women's health and posted in culture, feminism, gender roles, General, sexuality, women's health. You can follow any responses to this entry through the RSS 2.0 feed.
« Chivalry is Dead; Long Live Courtesy!
I Don’t Look Down on Family Women, But I Think I Understand Why Amy Glass Does »